Held at The Brotherhood in Manchester, on Friday 9th November, the event raised just over £1K in only a few hours, the largest amount from a single event Degree 53 has recorded to date.

Staff from both companies gathered, with betting slips in hand and fingers crossed, as the races played out on the screens. 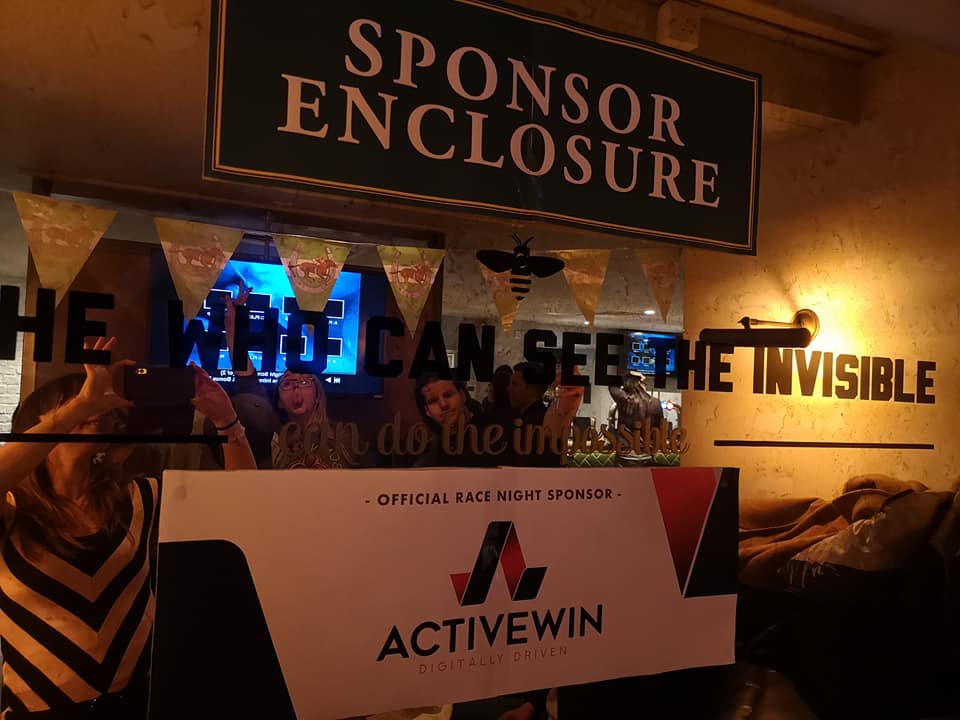 As main event sponsors, ActiveWin attendees were even given their own company booth and complimentary prosecco.

Degree 53 Operations Director Richard Wagstaff had the unenviable task of reading out the horse’s names, and his colleagues had not gone easy on him.

Monikers ranged from the risqué to the downright rude, with more than a few in-jokes thrown in for good measure.

He coped manfully with the task, but was no doubt relieved to reach the final race – the auction.

This was where the bulk of the money was made, with guests outbidding each other to claim one of the eight horses for the final race.

Proceeds were then divided equally between the winner and the charity.

Andrew Daniels, Managing Director at Degree 53, said: “This was a fantastic night and I’m glad everyone enjoyed it so much. We’ve been raising funds for St Ann’s Hospice over the year and this was by far our most successful event.

“It’s a great cause and I’m pleased to say we’ve already beaten our target for the year. I’d like to thank the ActiveWin team for supporting us and coming along. I’m sure we’ll be doing more of this type of event in the future.”

It was a glorious night, which pushed Degree 53’s fundraising for the year up to the £4K mark, with a well over a month of 2018 left in which to boost the total.

For those unfamiliar with Degree53, the specialist tech firm has developed some of the best bespoke mobile apps and websites in gambling, sports, finance, retail and education. Clients include Betfred, Sofaworks, GVC Holdings, Vibe Tickets, Medichecks, Goldchip, Totesport, Flint Group, Ready for School, Hollywood Casino and Bookies.com to name a few.

In 2017, Degree53 moved from the Sharp Project into two purpose-built floors within Steam Packet House to expand its team of developers. Combined with the teams from ActiveWin, TradeFred and Adzooma, the classic Victorian building has now become one of the hottest addresses in Manchester for digital excellence.

ActiveWin and ActiveWins support the work done by St. Ann’s Hospice you can make a donation here.